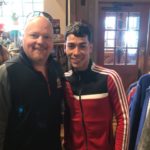 FatBaldGuy or Keeneland Dan as his Twitter followers know him as is the the best handicapper in the business.  Dan is the ultimate handicapper because of his 35 years of horse racing knowledge and the extreme amount of research which it takes to win on a consistent basis. Dan spends 50 to 60 hours a week in the Formulator DRF PP’s . He now has his own database of over 10,000 notes on horses.

9 years ago Dan went public and opened Fatbaldguy racing,  the membership has grown 300% in 9 yrs to where Dan cuts it off now .  Dan’s willingness to teach and talk with members is second to none.  Covid slowed him down for only a couple months and the company has continued to thrive.  Dan now has a staff of 7 that helps him around the country.

Dan’s system has worked for several years now and its why Dan has went public to teach others and not only provide picks but also teach the method.  Dan believes in the multi race wager as well as Star play straight bets.  He does not believe in betting 30 races a day every day.  Dan shows people how to survive and how it is ok to bet straight.  It is ok to bet with a partner in the Pick 5 or Pick 6.  Dan is well known at Belterra and Turfway Park.  He is a celebrity in the Green room at Keeneland for years now.

Dan is not a contest player but has qualified multiple times for the NHC and won BCBC entries thru the years.  He finished top 8 at Keeneland in the Grade One Gamble multiple times and in the BCBC at Churchill was top 15.    Dan is a cash player .  Dan prides himself in being in his 50’s and semi-retired with zero debt and two companies with zero debt.

Dan believes in 3 star and 4 star plays and hitting over 35% of these plays with a rebate the math makes it possible to win.  Dan believes in having an opinion and trying to crush that one or two races.  He believes in the Single then Spread method of playing the Pick 4 or Pick 5.

He likes to go 1 by 2 by 3 by ALL ,  then betting bigger ticket w strongest opinion 1 by 2 by 2 by 3 and trying to hammer it .  Any budget can play this way and a team of guys can certainly do this method.   The key is the single , he believes you got to get the single to win 40% of the time.

Dan helped gentleman win 1.3 mil in the Rainbow Pick 6 with his single and his longshot in the last went wire to wire at 35-1 to win the man his million.

Dan charges peanuts compared to others and keeps a good relationship with DRF, CDI, Keeneland, Past the Wire, and many more.  He has friends all over the business to get him and his clients inside information with the babies.

Dan has cashed and singled so many first and second time starters thru the last 9 years they are countless.  Dan believes in information and learning who he can get it from and who gives out bad tips.   Dan is great at seeing through the BS.

Come Check FBG out you won’t be sorry.

This site is © Copyright 2012, All Rights Reserved