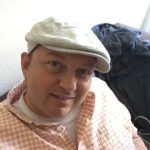 I first got involved with racing going to the local OTB with my Grandfather on the weekends in Connecticut.  There was a pizza parlor next door and I would get a slice, a soda and get the seat closest to the door so I could hear the race call over the speaker. There was no TV simulcast at that time. That then grew into a yearly Saratoga trip with my whole family, to eventually getting involved with a partnership group and owning at one point 7 horses.  The greatest feeling was getting my first win as an owner at Saratoga, with a 2yr old filly and Johnny V up in the irons winning by 7 1/4 lengths.  Me, yelling and screaming, “Don’t fall off Johnny V!!!” as you know as players, it’s never a winner until we hit the wire….

As a player, I have been firing away at the ponies since day one. Grandpa letting me look at the racing form at the pizza parlor to now writing selections for Fat Bald Guy racing.  The puzzle that we try to solve and the fact everyone looks at the same race differently is one of the reasons I love the sport.  I enjoy playing pick 5’s and 4’s and the occasional stab at a carryover in a pick 6. Im not scared to pick price horses to upset and love solving the puzzle that is the racing form.  I also love screaming #getthe$$$ as we cash together!!!